Hospitality - the main trait of the Kazakh people. Even if you have a minute and a very important matter "Zabierzow" in Kazakh house, the owner still will seat you at a table and offer fragrant tea with sweets.

Respect for the guests and the most important thing - the desire to take them to his home, contributed to the fact that over time, a traditional Kazakh meal took the form of ritual, not inferior, in its philosophical and allegorical content, the world famous Chinese tea ceremony. 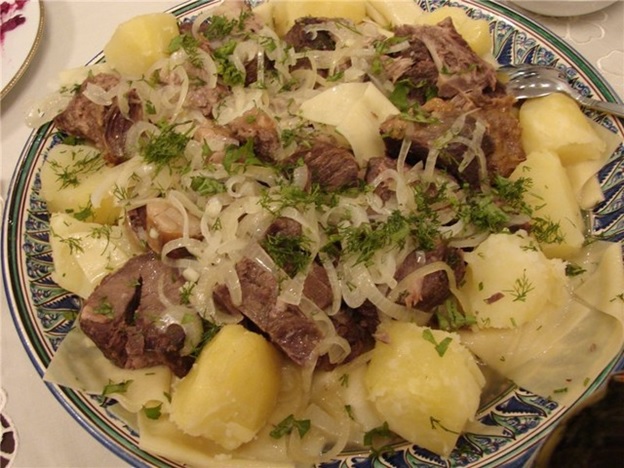 In a modern house or in a yurt shepherd guests met and sat at the table host. First of all, he will be offered a bowl of tea, which is in the house of the Kazakh dispensed only girls or young women. Quench the thirst of the guest is required to podnesut sy-ayak - a bowl of Honor. Tea is served cake, dairy cream - clotted cream, butter, dried fruits, nuts, sweets.

The Kazakhs held in high esteem not only black tea, but also the so-called shirchay. It add milk, oil, salt, slightly fried sheep's tail fat and flour. Such a high-calorie drink not only quench your thirst, but also to drown out the first hunger.

The Kazakh kitchen is traditionally a lot of meat dishes. One of the most popular - kuyrdak - fat hot roast mutton liver, kidneys, heart, lungs, and sheep fat.

Smoked, dried boiled mutton and horse meat made dairy drink soft drinks. If katyk from fermented boiled cow's milk tastes like yogurt and pleasantly refreshing, these exotic drinks like shubat of camel's milk or mare may give a sense of mild intoxication. The world-famous mare is prepared from fresh mare's milk fermented in the large leather wineskins. The time it ferment for three to five days, depending on the fat content and density of milk. A small alcohol content of 1.5 to 3 degrees koumiss gives aconite root, which is added to ferment. Koumiss contains biologically active substances, known for its healing power and immunity.

The main traditional dish of Kazakhs - besbarmak - boiled horse meat or mutton boiled in broth with sliced small pieces of dough and generously sprinkled with dill, parsley and cilantro, served on a large oval platter. Refreshments besbarmak is accompanied by a kind of ritual.

Before the guest of honor put Coy bass - boiled sheep's head. He cut up and divide it among the other guests, while each of the head is attached to a specific value. Schoolboys sheep give ear to the wish to be careful, girls get the palate, so that they are hard-working. The most distinguished guests are also served ham and lamb shank. Breast same goes to a young daughter, cervical vertebrae - married women. Boys get the kidneys and the heart, from which they supposedly quickly matured, and mutton brain for children under the ban: to be flabby. The young girl sat up in order not to virgins, never put on a plate of the ulna.

By besbarmak special cakes will be served ak-nan , baked with onions and poured the broth into bowls - sorpa . But the offensive of the spring holiday Nauryz Kazakhs renewal of nature meet at the table, which is certainly worth a Nauryz skin - porridge made of seven kinds of grain and Sumalak - a concoction of sprouted wheat. 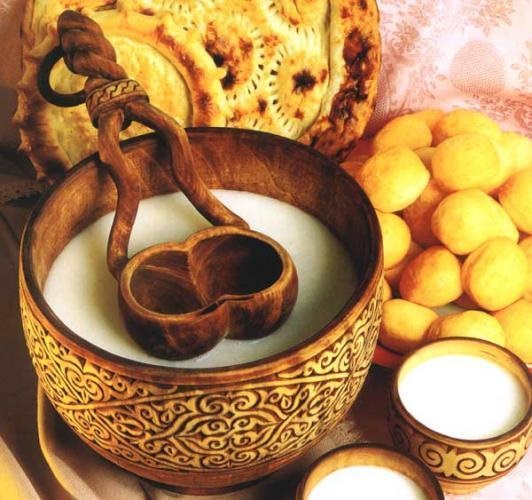 After tasting one Kazakh national cuisine, you will feel the fragrant breath of the steppe wind, the romance of the nomadic way of life.

Turkestan (Yassy) was known as a spiritual and political center of the Turkic people and the oldest capital of the Kazakh khans. Pilgrims say three trips to Turkestan as well as a small pilgrimage to Mecca.

Turkestan (Yassy) was known as a spiritual and political center of the Turkic people and the oldest capital of the Kazakh khans. Pilgrims say three trips to Turkesta ...

From the moment you set foot in the enchanting atmosphere of KARAVANSARAY, you will find yourself in a captivating tale that sings of Kazakhstan's ...